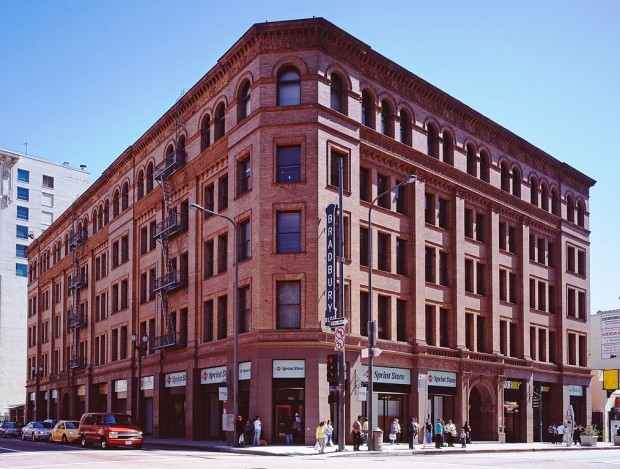 “Blade Runner” and “(500) Days of Summer” are two popular films which, while both excellent in their own right, have little in common. Except, that is, the location of their final scenes: the historic Bradbury Building in downtown Los Angeles.

The Bradbury is a place with an unusual story. In 1892, mining mogul Lewis Bradbury saw his end approaching and decided it was time to build a lasting monument to himself. He commissioned architect Sumner Hunt to design his vision, but Hunt’s imagination wasn’t sufficiently expansive—Bradbury wanted a building that would dazzle visitors for centuries to come, but the plans he received were ho-hum and conventional. Bradbury fired Hunt, and then, in a moment of either rare inspiration or mad whimsy, chose one of Hunt’s draftsmen as his replacement.

George Wyman was a young technical artist with no real training. He had just read Edward Bellamy’s novel Looking Backward, the story of a contemporary Rip van Winkle who wakes up in the year 2000. Fascinated by Bellamy’s vision of the department store of the future, Wyman was making some sketches—when the millionaire happened to walk past his desk.

Uncertain whether to take a job loaded with such risk and high expectations, Wyman and his wife decided to consult the astral plane. Using a planchette (a pre-Ouija board device that wrote with a pen instead of including a printed alphabet), they received a mysterious message. “Mark Wyman”, it began—the name of the draftsman’s kid brother who had died several years before. Next came the words “take the Bradbury”, and then on the next two lines, “Bradbury building and you will be”—what? The final word was incomprehensible. A friend suggested the puzzled Wyman turn the paper around. The spirit had written the word “successful” upside-down and backwards!

The Bradbury is today considered Los Angeles’ greatest architectural achievement. But in a way, Wyman’s success was inverted. After construction was completed he took a correspondence course in architecture and went on to design several other buildings, but none of them approached the Bradbury’s mastery, and most have since been torn down.

George Wyman’s one-hit wonder is exactly that. Its unassuming neo-Renaissance exterior hides a 5-story atrium lit by the sun. The enormous skylight looms over wrought-iron filigree railings, cage elevators and eye-catching stairways. The picturesque building has long captured the fancy of Hollywood location-scouts, and has graced the silver screen from 1944’s “The White Cliffs of Dover” to “The Artist” in 2011. A functioning office building today, its upper levels are usually off-limits to tourists, but visitors are welcome to explore the ground floor up to the second-storey landing and snap photos of the architecture of the present as seen through the eyes of the past.