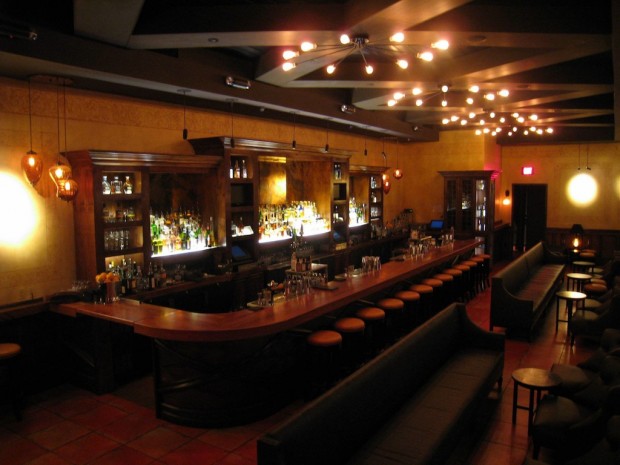 Walk up Broadway from the Santa Monica beach of an evening, and you could easily miss Copa d’Oro. Its subdued exterior, surrounded by ostentatious bars and shops, has a matter-of-fact classiness that won’t beg for your attention. Though if it’s early enough you might notice the folding blackboard standing in the sidewalk, emblazoned with a simple message: “happy hour, $5 cocktails.” Now that might catch your eye.

Copa d’Oro is a very specific type of place—something of a cocktail lounge that doesn’t take itself too seriously. You’ll find no class sensibilities or sky-high prices here, and it’s not connected to a hotel. Instead it’s all simplicity, charm, and tasty, tasty drinks.

The menu is unique in the Webster’s-conscious sense of the term—there’s nothing at all like it because you actually won’t find half these cocktails anywhere else on the planet. The other half seem to all hail from the 19th century, and the selection as a whole has a faintly West Indies/USSR/imperial vibe. This sounds confusing when put into words, but it works thanks to the un-thematic decor of the place (more on that in a bit) and the subtlety of flavor in the drinks themselves.

Everything uses organic, locally-grown fruits and vegetables and quality liquors of worldwide origin. Some favorite Copa originals include the Caribbean Collins, a heady mix of dark rum, passion fruit, lime and ginger beer, and the refreshing Lenin-Aid, combining gin, cucumber, celery and lime. The most recognizable happy hour standby is the mojito, but right next to it you’ll find Pimm’s Cup, a Victorian London digestive tonic that’s found a new life among those who haven’t a care in the world. The food selection is limited but delicious (try the lemon artichoke dip) and the full cocktail menu is a list as long as your arm of delightfully original drinks.

Ultimately, Copa d’Oro is an experience. The doorman is the friendliest you’ll find in the area and among the most sharply-dressed, while the personable bartenders habitually cut orange peels into lightning strikes and sport Mumford-style vests and mustaches. The music’s never overpowering and neither is the crowd, despite the place’s popularity. Vintage lightbulbs fan across the ceiling and the only screen of ordinary dimensions plays film, not TV—anything from Fight Club to Get Carter could set the backdrop to your evening, or even a silent West Side Story. If you’re looking to enjoy a cocktail in environs simultaneously classy and casual, Copa d’Oro’s a place well worth trying.