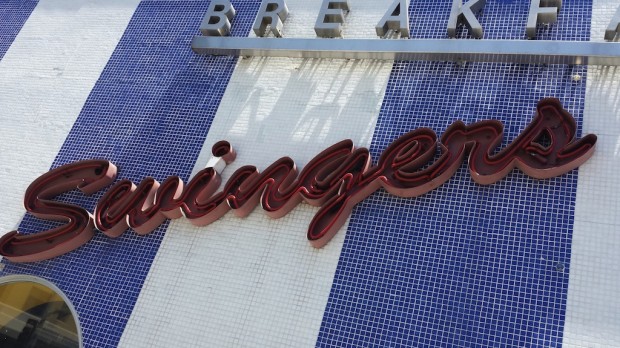 The diner experience is a classic element of Americana, one that seems to be almost exactly the same no matter where in the country you go. From the heart of the midwest to the streets of New York City, the American diner sports a spontaneous uniformity, nearly as standardized as any chain restaurant but with ten times the character. And then there’s Swingers.

Swingers is to your average diner what punk rock is to the Great American Songbook. First off, there’s the decor, which is idiosyncratically identical at both the Santa Monica and Hollywood locations. The exterior is only half realized at the latter, where the restaurant shares a building with the Beverly Laurel Motor Hotel, but the blue-and-white striped tile hints toward the final form expressed on Broadway just fifteen blocks from the ocean. Here it’s a boxy building, the aforementioned stripes broken up by red tile stars and round porthole-style windows.

Step inside and and feast your eyes on the tastefully garish juxtaposition of colors and patterns. One wall features the same stripes as the outside while another is dotted with huge pink stenciled cow heads against a yellow background. The booths are plastic-covered plaid, as are the bar stools, and the light fixtures come in both cylindrical and Chinese-lantern form. The typography on the reservation signs is identical to the greatest punk album of all time and the menu covers sports a stripe of large American-flag hearts.

Open up the menu and you’ll find a dizzying collage of ’70s pop culture, half a cornucopia of black-and-white photographs and cartoons that defined the second half of the 20th century and half an even-more-than-usually diverse selection of diner food possibilities. Between Burt Reynolds and André the Giant, the Kool-Aid Man and the Mickey Mouse Club, you can order anything from Irish oatmeal to turkey meatloaf, almond milk to a Heineken. The breakfast selection is considerable, but not an overwhelming majority of the menu as at many another diner.

And, somewhat unusually for a place offering such classic eats, patrons who habitually avoid gluten or animal products are more than accommodated. A good percentage of the menu entries have Wingding symbols beside them in the margin—a thumbs-up icon indicates a vegetarian dish, a two-fingered peace sign marks something vegan. It’s above-average diner food by most accounts, and the desserts are quite tasty. And while opening at 7am is pretty standard for this category of restaurants, the hours at the other end of the spectrum are what gives Swingers its added charm—even if you’re out late you can still grab a hot meal before turning in, because from Thursday to Saturday, the doors don’t close until 3am.