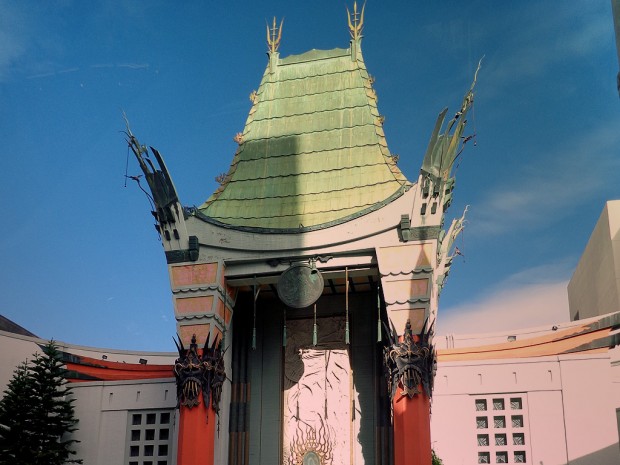 Grauman’s Chinese Theatre is the most famous theater in Hollywood, and possibly the world. Since its opening ceremony on May 18th, 1927, it has always been among the first to premier the newest motion pictures. But what has made it famous, is its tradition of fixing in concrete the signatures, handprints and footprints of those actors & actresses who have had the largest impact on the screen. The forecourt of the theater has the prints of nearly two hundred Hollywood celebrities!

There are a few stories of how the idea to take prints came about. A reasonable one was told by Sid Grauman, the creator of the Chinese Theatre, during a brief 1937 interview on Lux Radio Theatre. He stated that he got the idea upon accidentally stepping in some fresh concrete when the theatre was being built.

Mr. Grauman only owned a third of the share in the place, partnering with Mary Pickford, Douglas Fairbanks, and Howard Schenck. Two years after opening, Grauman sold his portion to the Fox Theatres chain, but continued on as the Managing Director of the theatre until his death in 1950. In 1973, Ted Mann bought the establishment, and changed it’s name to “Mann’s Chinese Theatre”, until his bankruptcy in 2001, when it was sold to Warner Bros. and Paramount Pictures. The following year, during a restoration project, the name was changed back to its original. In 2013 however, the TCL corporation bought the theatre, and changed its name to the “TCL Chinese Theatre”.

The Chinese Theatre still plays films, and despite its historical significance, has very ordinary ticket prices. You can take a twenty minute tour of the Chinese Theatre 7 days a week for a reasonable fee. Click here for up-to-date prices & availability.