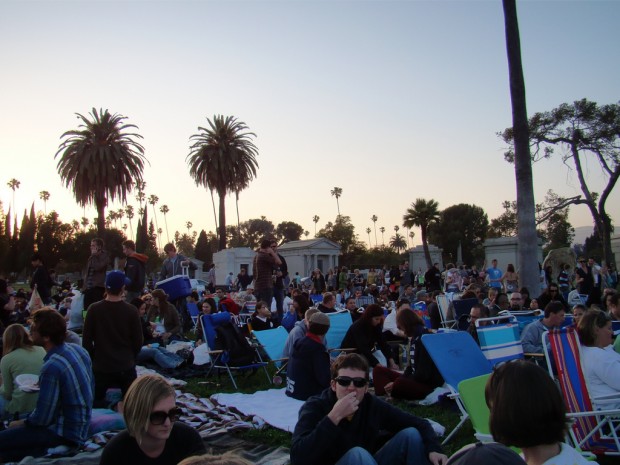 Ever since early filmmakers realized that the varied terrain of Southern California provided easily-accessible locations for almost any kind of movie, Hollywood has been the heart of American cinema. The rise of independent film in recent decades has vastly expanded the possibilities of the art form, and more movies are made today than ever before. The best place to catch what’s happening is at a film festival, and the Los Angeles area is loaded with them. Here’s a handy calendar:

The Scandinavian Film Festival LA screens the latest in Danish, Finnish, Icelandic, Norwegian and Swedish filmmaking, often featuring big-name directors and actors from those respective countries. Feature films are the primary offering, with a few documentaries and shorts. The festival takes place at the Writers Guild Theater.

The Pan African Film & Arts Festival is a combination of films about people of African descent and the display of work in all media (including performance) by black artists. The 150 films screened annually are shown at Rave Cinemas Baldwin Hills 15.

The Los Angeles Italia Film, Fashion & Art Fest is another festival that extends beyond movies alone, this one focusing on the work of Italian filmmakers, designers and artists. This prestigious event often has Oscar winners in attendance and takes place at the TLC Chinese Theatres.

The Beverly Hills Film Festival is another of the big players, annually drawing crowds of 20,000 for five days of cinema. Though focusing on independent and emerging filmmakers, celebrities and industry leaders are often found in attendance. The festival takes place at the TCL Chinese Mann’s Theatre.

The Zero Film Festival is exclusively restricted to self-financed films, making it one of the most truly independent festivals around. The Zero has numerous screenings around the world, but the Los Angeles festival takes place at Regal Cinemas and other nearby locations.

The United Film Festival is another multi-city  festival,  with the L.A. event occurring at the end of April at the Los Feliz 3 Cinemas. Focusing on bringing together filmmakers of all backgrounds, the United Film Festival presents both audience and jury awards for narrative, documentary, and short films, as well as offering a screenwriting competition.

The Vietnamese International Film Festival, screening 60+ films annually, is the largest Vietnamese festival outside of Vietnam itself. The festival occurs at the UltraLuxe Anaheim Cinemas.

The Indian Film Festival of Los Angeles, which takes place annually at ArcLight Hollywood, celebrates people of Indian descent working in all aspects of the film industry. The festival also shows classic Bollywood movies in addition to screening new films each year.

The Sunset International Film Festival Los Angeles is a smaller festival for the real underdogs, focusing on films that have a difficult time being accepted into other venues. Categories beyond the usual include experimental film, webisodes and TV pilots. The festival takes place at the Whitefire Theater.

The Los Angeles Reel Film Festival stands apart from most festivals by screening only the winning films, even offering winners the option of not screening to allow them to save their world premier for a bigger event. The festival occurs at the Whitefire Theatre in Sherman Oaks.

The L.A. Comedy Shorts Film Festival, cofounded by the creator of Malcolm in the Middle, brings independent filmmakers and celebrities together for a weekend of hilarious short film. The festival takes place at the Downtown Independent Theatre.

The Los Angeles Asian Pacific Film & Video Festival screens the work of both American filmmakers of Asian-Pacific descent as well as foreign film. The festival, which screens at a number of theaters in the L.A. area, has screened nearly 4,000 films since its founding in 1983, making it one of the city’s most important festivals.

The Los Angeles Film Festival is the city’s largest, attracting nearly 100,000 people every year and screening 200+ films. Taking place at Regal Cinemas in L.A. Live and several other nearby locations downtown, the festival shows nearly every type of film: features, documentaries, shorts of both narrative and experimental or animated varieties, and music videos. The festival counts as a qualifier for the Academy Award for Best (Live Action/Animated) Short Film, making it one of the biggest deals around.

The New Media Film Festival has been described as “Sundance for the Facebook crowd,” a celebration of cinema that exploits the internet and new technology. Award categories include trailers, films shot on the RED digital camera, films shot on camera-phones, and machinima. The festival takes place at The Landmark.

The Downtown Film Festival Los Angeles is a big event, screening films at several locations in Central L.A.—over a thousand since the festival’s inception in 2008. The awards are more Oscar-like than most festivals, with prizes for best director, best cinematography, best actor/actress, etc.

The Feel Good Film Festival is among the most upbeat, with screenings not only limited to movies that end happily, but even replacing the traditional red carpet with a yellow one. The festival, which occurs at the Laemmle Noho 7 Theatre, screens 60-70 films annually.

The HollyShorts Film Festival exclusively screens movies under 30 minutes in length, but there’s over 350 of them each year, screened at the TCL Chinese Theatre. In addition to the main festival, HollyShorts also sponsors monthly screenings at the same location.

The Bel-Air Film Festival involves both independent and studio filmmakers, but is limited to U.S. and world premieres—if you see it here you’re seeing it first. The festival  holds screenings on private Bel-Air estates and in local theaters.

The Hollywood Film Festival is yet another that bridges the gap between studios and independent cinema, with numerous Oscar winners in attendance each year. The festival occurs annually at the ArcLight Cinemas Hollywood.

The La Femme Film Festival celebrates films “by women, for everyone,” featuring works by female directors, writers and producers. The wide range of categories not only includes the usual feature/documentary/etc., but also foreign film, films about animals, and animal-rights documentaries. It takes place annually at the L.A. Live Regal Theaters.

The Los Angeles Latino International Film Festival is a celebration of both Spanish-language and English films by Latino filmmakers. The festival is held at the Orpheum Theater.

The Screamfest Horror Film Festival is called the “Sundance of Horror,” and as the longest-running horror-themed festival in America, the title is well deserved. The festival takes place at Laemmle’s NoHo 7.

The Valley Film Festival takes place in L.A.’s San Fernando Valley at the Laemmle NoHo7. With its main category named “Made in the (818),” the festival focuses on local independent cinema. There’s no exclusivity here, however: while there is secondary focus on female and elderly filmmakers, as well as foreign film, movies by almost everyone can be found here, with genres ranging from adult to mockumentary, student to sci-fi.

The Los Angeles International Children’s Film Festival is a great place to introduce your offspring to the cinematic arts. The only two categories are live action shorts and animated shorts, making it perfect for child-sized attention spans. It takes place at the LACMA and screens over 100 films from around the world for young audiences.

NFMLA (New Filmmakers Los Angeles) is a festival for emerging directors that annually features a staggering array of films, with monthly screenings at the AT&T Center. The festival is split into three divisions, allowing visitors to purchase tickets to only the features program, one of the two shorts programs, or the entire event.