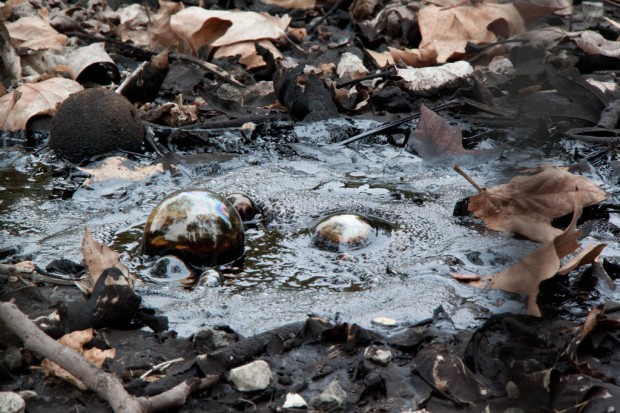 The recorded history of Los Angeles extends further back than almost any other American city. But long before the Pobladores founded the town of Our Lady Queen of Angels (or in the original Spanish, Nuestra Señora la Reina de los Angeles), before Juan Rodríguez Cabrillo claimed SoCal for Spain, even before the first Tongva and Chumash natives settled in the area, animals were getting stuck in the tar.

The famous La Brea Tar Pits—which possess the distinction of having the world’s most redundant name, given that brea is Spanish for “tar”—have long attracted the attention of those who came upon them. The black pools of viscous asphalt, located right in the middle of the Miracle Mile, appear to boil due to the escape of methane gas from below the surface. Both native tribes and Spanish explorers recognized the value of the tar for caulking boats, but it wasn’t until the monetary value of the area’s crude oil became apparent that people realized what the pits had been doing for us since time immemorial—catching huge mammals and preserving them until the advent of natural history.

The first fossils embedded in the pits were found in the 19th century, but it wasn’t until a Union Oil petroleum geologist named W.W. Orcutt found numerous saber-tooth tiger, ground sloth and dire wolf skeletons in 1901 that science really sat up and listened. Over a million bones have been dug up in the hundred years since, primarily of species from the Pleistocene Ice Age. The story goes that large herbivores frequently stepped into tar naturally camouflaged by leaves and debris, got stuck, got eaten, and ultimately led to the sticky demise of their predators as well. More than 1,600 dire wolf skulls alone have been unearthed, along with mastodons, condors bigger than any living today, and numerous mammals that no longer call North America home—llamas, jaguars, tapir, and prehistoric horses. Even human remains have turned up: a skeleton known as La Brea Woman, an apparent murder victim interred with her dog thousands of years before forensic science.

Visitors to Hancock Park can see the actual pits from which the fossils were dug, and even observe ongoing excavation. The Page Museum on site has displays featuring hundreds of the best fossils, and includes a fishbowl lab where you can watch paleontologists at work and the Ice Age Encounters show with an animatronic saber-tooth cat.