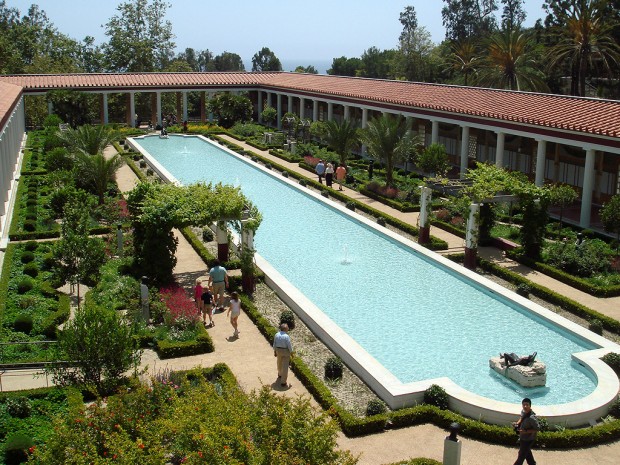 Things to do at The Getty Villa

The Getty Villa is one of two campuses of the J. Paul Getty Museum (the other being the Getty Center). The Villa sits on a hill overlooking the Pacific Ocean. It houses a collection of 44,000 Roman, Greek, and Etruscan antiques & works of art from 6500 BC to 400 AD, roughly 1200 of which are on display.

The Villa was designed and constructed in the early 1970s to resemble an ancient Roman country house in Italy, the Villa dei Papiri. It was built using authentic materials, and possesses a very defining look, including a 450 seat open-air theater. New skylights and windows in the building provide natural lighting, so that you can see the galleries at their finest. The Villa has four spectacular gardens, strewn throughout with over three hundred different varieties of plants, many such as the Romans would have had. Central of these gardens, is the grand outer peristyle. This garden has a beautiful 220-foot-long pool, hedge-lined pathways, stone benches, and a covered walkway around the perimeter.

The Getty Villa is open from 10:00 am – 5:00 pm Wednesday through Monday, and closed Tuesdays. Admission to the Villa is free, but requires an advance ticket. Parking is $15. For location information and more, please visit the Getty’s website.