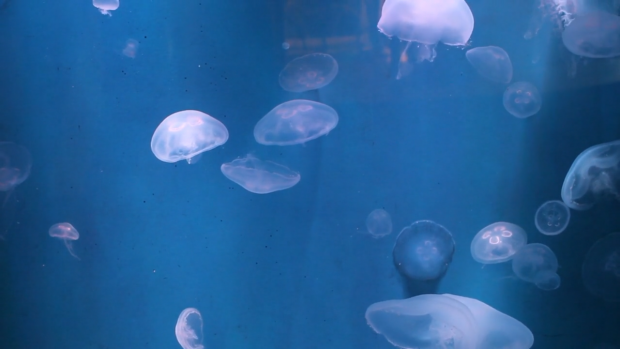 Spend a relaxing couple of hours at the Santa Monica Pier Aquarium, and enjoy a look into the fascinating and beautiful world beneath the surface of the sea.

The aquarium has over a hundred species of marine animals and plants, and each one of them is worth your attention (except for the Hermit Crab—he wants to be left alone). The aquarium has all the sea-life you’d expect, like sharks, bass, and stingray, but they also allow you to see something that even the keenest of eyes would miss: Microscopic plankton! Yes yes yes! With the aid of microscopes, you too can see the magical world of tiny waterlife. Other creatures at the aquarium include:

Yes, there is actually a fish called the “Sarcastic Fringehead“. There was once an incident at the aquarium where the two-spot octopus manipulated the water drain pipes, and flooded part of the visitor space with hundreds of gallons of water! While the chances of something that happening while you visit are incredibly low, you can still have a spectacular time there without such extreme adventure.

I offhandedly dismissed the sharks earlier as being expected at an aquarium, but they really don’t deserve such disrespect. Even the few species of sharks that deserve disrespect for occasionally trying to eat people don’t deserve the disrespect of being called ordinary, expected, boring, and commonplace. So! To show the sharks that you don’t think they are ordinary, expected, boring, and commonplace, you can at least go and give them your full undivided attention. Even better than this though, is to go on Sunday at 3:30pm, when they have shark feedings!

Every Tuesday & Friday at 2pm there are fish feedings for the public, which are also quite fun to watch. Beyond these two special scheduled occurrences, there is also storytime every Saturday at 2pm.

To get a taste of the absolute beauty of the aquarium, check out this short video:

You can find the aquarium on the beach level at the Santa Monica Pier, just below the historic Carousel.

The aquarium is open to the public Tuesday through Friday from 2pm – 5pm, and open on weekends from 12:30pm – 5pm.